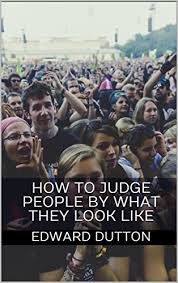 The title cracks me up.

I mean, it could have been something vaguely academic — maybe Physiognomy Reconsidered, or Physiognomy: The Abandoned Science; or it could have been something suggesively literary, like Body and Essence or A Book by Its Cover or Windows to the Soul. Or just some slightly more elegant phrasing of the same titular pitch, like People and Their Appearances or even Judging People by Their Appearance. But … nope. Professor Edward Dutton named his book How To Judge People By What They Look Like. It's a hilariously clunky title. The halting monosyllabic deadpan word chain reminds me of those xkcd "Up-Goer" comic strips based on restricted vocabulary. It makes me wish the book were 700 pages thick so I could spine it  obnoxiously alongside other amusing bullhorn titles like The South Was Right! and If We Can Keep a Human Head Alive and How to Start Your Own Country and The Heroin User's Handbook and Hitler: The Unknown Artist.

And if you're wondering whether the "How To" pitch is tongue-in-cheek, it is not. Or mostly not, I should say, since the author clearly has a sense of humor. "It is up to the reader," counsels Dutton, "to decide how cautious or reckless they wish to be based on the information presented." How can you not love an invitation to judgmental recklessness?

It is, in fact, the perfect title.

The book itself isn't bad. At just over 100 pages, it's a breezy, if somewhat slapdash, survey of past and present scientific research on various mental and temperamental traits and their correlation to observable physical characteristics in humans. The term for this line of inquiry, as I've already indicated and as you probably know, is physiognomy. And if you know that much, chances are you also "know" that physiognomy has long been a textbook example of "pseudoscience." Dutton's primary aim, which I think he accomplishes fairly persuasively, is to shore up the case against this textbook orthodoxy.

Part of the problem, as Dutton notes, is that physiognomy has historically been conflated with phrenology, which refers to the once-popular "belief that the nature of a person's character can be discerned by small differences in the shape of their skull." For whatever intuitive plausibility this  quaint 19th century "science" once advertised, phrenology has been roundly debunked. That's not true of physiognomy, which encompasses a wide range of testable claims that are still being sorted out. It may be tempting to think of physiognomy as the baby in the bathwater of phrenology, but the truth is that they have little to do with one another in fact or history. Physiognomy is an ancient idea that has, to whatever arguable degree, been validated through scientific research. Phrenology was a fad, like palmistry or psychoanalysis, and it fails every test.

Of course, the ignominy of physiognomy (sorry) owes to other social and historical factors. Part of the story surely concerns the well-recited cautionary tale of "Nazi science," which has been effectively leveraged over the decades to shout down any view of human phenotypic diversity that doesn't align with a tidily culture-bound accounting. I think the Nazi bogeyman is more than overplayed these days. While the watchwords and catchphrases are easy to repeat, I just don't think people genuinely imagine that we'll start holocausting paupers if it turns out that violent criminals have funny-shaped heads. No, I think the funk that attaches to physiognomy (and other forms of indelicate sociobiological and psychometric investigation) has far more to do with a perceived threat to a moral sense of fairness — amplified as egalitarianism in political discourse — that has gradually acceded to the stature of a governing ethos. Don't think politics; think politeness. People feel understandable hostility toward empirical realities that complicate an ideal moral landscape, and physiognomy, if it truly constitutes part of our empirical reality, is just a madly complicating bug. If their priors don't permit them to yell "heresy!," they settle on "discredited" or "debunked." Repeat and hope it sticks. It's good to know your shibboleths, yes? It's wiser, I now think, to extend the benefit of doubt to those who sputter. They do have their reasons, and it isn't bad faith all the way down.

I suppose it doesn't much matter because the brass-tacks empirical case for physiognomy is surprisingly easy to make. Dutton only mention trisomy 21 (Down syndrome) in passing, but I think that's a pretty solid place to start if you want to establish the baseline premise that at least some mental traits can be accurately inferred from external appearances. Perhaps betting on Corky's LSAT score seems cruel and unusual, but my point is simply that you know you wouldn't lose. That's a foot in the door right there, punk rockers.

Dutton's variegated showcase dispenses with such rudimentary roadwork, focusing instead on physical characteristics that invite generally accurate, or statistically significant, physiognomic inferences. These include physical markers of high testosterone (which conform to stereotypical male behavioral complexes in both men and women); body shape (wherein Dutton mounts a qualified defense of William Sheldon's "endomorph/mesomorph/ectomorph" somatotypology, mainly insofar as these "partly reflect differences in testosterone level"); body size (yes, obese people tend, with considerable variation, to be less intelligent and rank lower in conscientiousness); marks of sexual orientation or "gay face" (which can be detected, well above chance, by human observers under lab controls, as well as by facial recognition software), and facial symmetry/asymmetry (with some evidence tending to vindicate some aspects of Cesare Lombroso's "criminal man" typology). And while this is not a racialist tract per se, Dutton doesn't shy from citing J.P. Rushton's "Life History Perspective" concerning broadly observable racial group differences as evidence for physiognomy.

More curiously to my mind, Dutton reviews evidence for physiognomic effects in the study of less conspicuous characteristics, such as digit ratio, pupil size, and left-handedness (I don't think he discusses hair whorl patterns, but you can look it up). And to further complicate the definitional parameters, he explores the significance not just of developed physical traits, but of affectations (the "glassy stare," for example), as well as bodily adornment (tattoos, makeup, etc.), and even scars and wounds that may be indicative of neurological trauma. Things get even gnarlier when he offers up a broadly physiognomic account of religiosity and political affinity, speculating that rapid changes in selective pressures brought to bear by the industrial revolution introduced an elevated mutational load, with atheism and "dogmatic leftism" tagging along in the new muck. There are good reasons to be skeptical of such an effect absent stronger evidence than Dutton presents, and I can certainly think of different interpretations to account for the evidence presented. Still, it would be funny, to a cosmic nihilist such as myself, if such a provocative thesis turned out to be true. There might indeed be something to the "Mormon glow," regardless.

Nested throughout his appraisal of evidence for — and occasionally against — various physiognomic hypotheses are Dutton's theoretical speculations on the meaning of it all. It's no surprise that he settles on Darwinian firmament (as the above example illustrates), emphasizing mutational load, sexual selection, assortive mating, and the "life history" perspective popularized by evolutionary psychology. I've already mentioned Dutton's favorable account of J.P. Rushton's research on racial differences, so it's worth noting that he goes a step further in discerning evidence for intra-species (and intra-racial) r/K strategies that might correspond to physical traits. Is pattern baldness more common among cads than dads? How about tramp stamps? Place your bets.

The signal to noise ratio varies considerably and there are plenty of nits to pick with many of the claims explored. I think Dutton is probably too dismissive of the possibility that the direction of causality might occasionally root in culture or other environmental factors, rather than in his preferred vat of Darwinian acid (depending, of course, on how far you want to play it down; culture doesn't form in a vacuum). Yet it all adds up to something rather than nothing for the aspiring street savvy physiognomist playing as cautiously or as recklessly as prudence and science permit. So while the belief that gap-toothed women tend to be easier to bed remains … unproven, there are ample empirically grounded bases for rejecting the claim that physiognomy is rank "pseudoscience." Numerous studies show that people are able to rank intelligence above chance simply by looking at unadulterated human faces. That's pretty interesting, even if it's not all that surprising. As evolved social beings with tumescent brains, it makes sense that we would have developed sensory modules for detecting useful or potentially threatening psycho-social traits among our kind. Of course, it also makes sense that such sensory adaptations could be thwarted or hijacked in the same evolutionary scheme, perhaps through mimicry or countermanding deceptive (and self-deceptive) strategies such as those explored by Robin Hanson and Kevin Simler in their recent book The Elephant in the Brain. An arms race pitting detection against deception might account for the fact that physiognomy isn't a far more pronounced feature in our long-evolved mental toolkit. But that's mad speculation on my part.

Still, it does lead me to an interesting question that I don't think is sufficiently engaged in Dutton's monograph — perhaps because there's little relevant data. This question concerns whether some people are especially good at this stuff. Across many dimensions of measurement, Dutton relies on fairly weak but significant correlations, and with the "replication crisis" humming like a loose fluorescent bulb in the background, he does well to address this potential shortcoming. He points out that the cited coefficients are very much in line with findings in other psychological studies, and he emphasizes that the weak or moderate correlations tend to be strengthened insofar as they are typically clustered along multivariate scales of prediction. Fair enough, but I'm really curious about what's going on within the data — you know, when you get granular.

We're all familiar with studies showing that most people can't taste the difference between top- and bottom-shelf wine, right? Yes, but unless you're a complete simpleton, you probably also understand, as high-stakes market research confirms, that some people can indeed discern absurdly nuanced gradations in the character and quality of wine, and with astonishing accuracy. The same clods-to-gods continuum applies to general sensory reception in other domains, from food, to beer, to fragrances, to sound recording. That's why breweries hire "super tasters" who are rigorously tested and well compensated for their superior saporous sensitivity. Well, since the evidence is pretty strong that physiognomy is real at some crude population-scaled level, it's only natural to wonder whether there are physiognomic sommeliers in our midst, isn't it? Are some people gifted with the ability to more accurately "judge people by what they look like"? I'm betting the answer is yes, that such people do exist. And if they do, the questions that follow are just as interesting. Does such an acuity correlate with other traits? General intelligence? Verbal intelligence? Empathy? Is it more pronounced among women (my bet), or men? Does it come naturally to, say, psychopaths? Is it absent among Autistics? Does perceptive accuracy among the gifted change when cues are supplied by people of closer or more distant ancestral lineage?

All of which is to say, more research is needed!

Dutton's slim book is a decent start. If you come expecting a studious popular history of physiognomy, you'll be disappointed. What Dutton serves up is instead a freewheeling and well-sourced drive-by tour of an unjustly tarnished sphere of empirical and theoretical investigation. He supplies plenty in the way of solid empiricism, even if the theoretical scaffolding occasionally veers into questionable territory. I don't think it really works as a how-to primer, but then I'm short-statured atheist mesomorph with a lazy eye, so you probably shouldn't trust me.