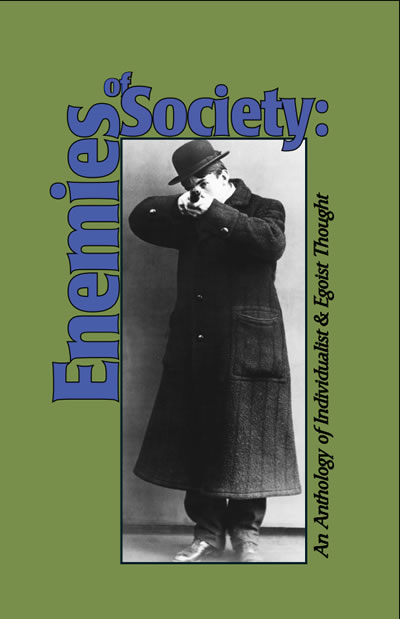 The latest addition to the Nine-Banded bookcase is an anonymously edited Ardent Press volume called "Enemies of Society: An Anthology of Individualist & Egoist Thought." I'm proud to note that the promotional copy was penned by the melanin-proficient Brit-blogger known as MRDA, a longtime Hog-habitué and self-styled querdenker who gives not a fuck what you think.

As an observant Teuton once remarked, “our atheists are pious people.” Some 167 years later, our most outspoken “freethinkers” continue to deify concepts in a manner befitting the religionists against whom they rail. Rather than slaying the Sacred, these ostensible infidels have merely transubstantiated it to suit their own psychological needs. And given the grab bag of idols they insist on subjecting themselves (and others) to, their needs must be legion! Such is the situation, when even those spirited souls who shake off this shackle or that end up enmeshing themselves within a thousand more: “Gaia,” “Democracy,” “Race,” “The Greater Good,” and “Humanity,” to name but a few. Even anarchists—mouthers of the mantra “no gods, no masters”— find themselves in thrall and worship to these conceptual chimeras. Under such sanctimonious skies, every breath becomes a blasphemy.

Fortunately, there are those who respire away such reifications with an unfettered gust of the lung. Not content to reject God and the State, anarchic egoists spit on the Social Contract, puke on Posterity, sodomize Society, and murder Morality. Why, they even pause to urinate on the Übermensch along the way!

Inspired by the work of the late, great Max Stirner (the reprobate earlier referenced), the likes of S.E. Parker, James L. Walker, and Renzo Novatore proudly affirm the primacy of their personal desires, slaughtering every sacred cow dumb enough to stand in their way. Their words, along with those of other individualist anarchists, can be found within Enemies of Society, an anthology best described as a union of egoists on the printed page. Forget those tiresome tomes preaching “social anarchism,” anarcho-communism, or some other uninspired utopianism; this is the beating heart behind the very notion of anarchy: Unbowed, unorthodox, untethered—unique.

Meet the beasts who shouted “I” at the heart of the world.

After you order two copies for Father's Day (one for you and one for Dad), be sure to check out MRDA's infernal scribblings here.