Just in time for Mother's Day! 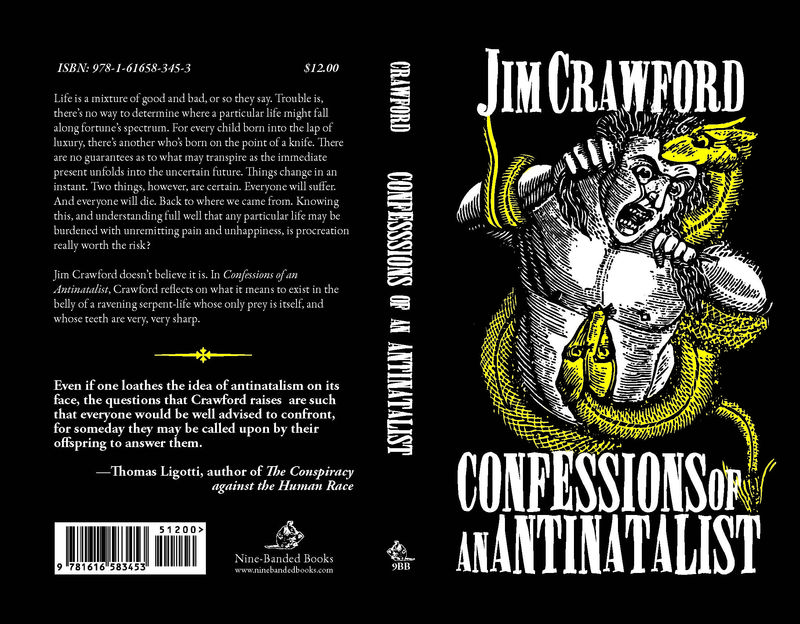 You can order copies through Amazon (their stock is on the way). Or you can save on postage by ordering directly through Nine-Banded Books.

Send me an email if you live near an indie bookstore that you think should carry this book. And if you would like to receive a review copy, just ask nicely and let me know where and when the review will appear.

Editor's Note: 9BB-related chatter keeps leaching up in obscure corners of the web, and I've been remiss not to keep you informed. What follows is a loosely annotated roundup of some ripples that have lapped to my attention concerning Andy Nowicki's novel, Considering Suicide. The next edition will be devoted to L.A. Rollins' The Myth of Natural Rights and Other Essays.

While there have been a couple of promotional segments on the traditionalist right podcast, The Political Cesspool, Andy Nowicki's  Considering Suicide
has thus far garnered more attention from explicitly irreligious
reviewers. I suppose this may attribute to some degree of incestuous
Hogospheric cross-pollination, but it's still curious since I sent
review copies to a gaggle of rightist and Catholicy journals. Maybe
the usual suspects are put off by all the cusswords, or perhaps the book's despairing refrains
jar against higher sensibilities. I really have no idea, but I'm not at all disappointed since I'm frankly more interested in the views of readers who are disposed to reject Andy's foundational premises — or those of his narrators.

To kick things off, check out Ann Sterzinger's gently suspicious and analytical critique.

Once you've washed that down, mosey on over to see what the Melanite-Stirnerite man about London has to say about the same troublesome book. I really got a kick out of this one, and I will admit that MRDA's one-liner-laced commentary, in addition to being studious and fair, echoes many of the thoughts I had while reading and editing Andy's work. I think MRDA is particularly insightful when he slices into the political — or meta-political — core of the book's treatise-like second part, arguing that the narrator's implicit cultural diagnosis (that sees chaos and tyranny as the natural consequence of society's drift toward secular fashions) crucially overlooks the ways in which Christ-primed preoccupations crest up in sublimated garb:

“If God exists,”
states our author, “two things can be said with certainty, about an
ungodly, illegitimate government: it will be both chaotic and
tyrannical.”

I
see things as just the opposite; the modern, expanding state does
everything but do away with Christ! Sure, the modern, lib-dem
secularist might do so in name, yet the salvationist rhetoric spewing
from his gob all too often belies his atheistic airs. The incessant
desire of this-or-that demagogue to wage a War on Whateverthefuck, in
order to save society from itself; the desire to spread the gospel of
“democracy” to those foreign heathens, in order to save humanity from
itself; and doesn’t all the fussing about PC terminology, culminating
in the legalistic lynching of the “hate criminal”, come off as an
enforcement of the edicts found in James 3: 9-12?

Indeed,
it seems, despite my prior scepticism, that Christ did die, only to
rise again! Between the neo-colonialist evangelism of the Right, and
the neo-Puritanical reformations of the Left, what does the modern
managerial-humanist state amount to, but the ultimate culmination of
his project? Brothers and sisters of the congregation, you no longer
need wait for the Second Coming: it takes place under your noses, over
your heads.

MRDA's Nietzsche-doused rebukes are tempered by thoughtful measures throughout. He even concludes with a blurbable splice of nice:

A powerfully partisan, yet probing piece that strikes the reader in the face with sincerity, Considering Suicide may or may not win one over to the author’s outlook: what it will do is make you re-examine your own.

Finally, you'll want to tune in to this Underworld Amusements podcast, where Andy matches wits with freethinking Satanist, Kevin Slaughter. The politely combative chat is preceded by Kevin's pitch-perfect reading from a particularly angry and provocative section of the novel. Good radio.

Considering Suicide is available for $12 postpaid from Nine-Banded Books.