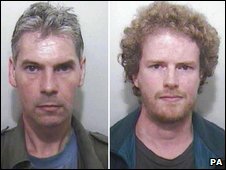 In July, 2008, after being convicted of thought crimes in the UK, two writers fled to the United States in a bid for political asylum. As soon as they arrived stateside, the writers were locked up in a California jail were they languished for nearly a year as their case was docketed before an INS court. The case received scant media attention until June 3, 2009, when the L.A. Times reported that Judge Rose Peters had denied the writers' appeal, ruling that "the men hadn't shown they had been
persecuted in the past or were likely to face future persecution."

Following the ruling, the two writers were sent back to their native island, to be persecuted.

Two men have been jailed after becoming the first in the UK to be convicted of inciting racial hatred via a foreign website.

In handing down the sentences, Judge Rodney Grant scolded the writers for their use of illegal words, words that he deemed "abusive and insulting," words that he claimed "have the potential to cause grave social harm," words that clearly have no place in an open society. "These are serious offences," said the judge. "I can say without any hesitation that I
have rarely seen, or had to read or consider, material which is so
abusive and insulting… towards racial groups within our own society."

If you would like to know what criminal speech sounds like, Sheppard and Whittle's words still pulsate with harmful potential on the Heretical website. Perhaps you will be offended, or bemused, or provoked, or simply bored. It doesn't much matter at this point. The law has spoken. Two writers have been imprisoned for expressing thoughts and we should breathe easier. Persecution is just a noisy watchword anyway. Free speech is about Henry Miller and Lenny  Bruce and Salman Rushdie and those Muhammad cartoons. It is important to understand the difference.

The Hoover Hog has previously written about Sheppard and Whittle here and here.