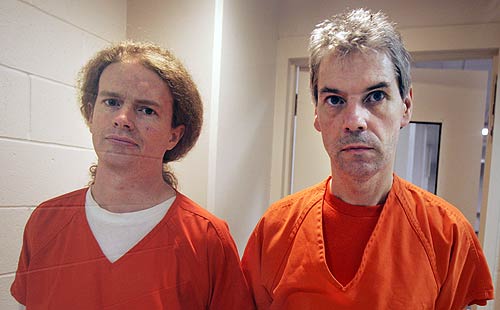 Several months ago, I tried to draw attention to the little-reported case of two convicted British thought criminals languishing in a Santa Ana hoosegow as their appeal for political asylum proceeded before an INS court. Several months later, Simon Sheppard and Stephen Whittle are still behind bars, still in U.S. custody. And the news isn't good. A judge denied their appeal, and after nearly a year in lockup the publishers of Heretical.com now wait to be shipped back to the island from which our forbears escaped, where they face multi-year prison sentences for expressing thoughts.

The upside is that the LA Times finally — yesterday — took notice of the story. In a more or less evenhanded report filed by Dana Parsons, the saga of the "Heretical Two" is lightly spun as as a legalistic farrago:

Their lengthy detention is largely the product of the asylum-seeking
process that Sheppard and Whittle brought on themselves when they
entered the country. They and their original attorney acknowledge that
motions they filed helped prolong the case.

Judicature is a paper-tendriled beast, we are reminded, and the matter is complicated. Prolonged jumpsuited detention was of necessity, it must be understood. Clogged in the the sausage factory of a process, a lone appeal must stall and sputter in the slow cogwork of procedures proceeding in the bureaucratic jam of so many tittles and forms and strikethroughs and hearings and caseloads and delays the rest of it. It's a small price for civilized order. And someone is always disappointed.

Yet the judge's reasoning is never illuminated, never even disclosed. The LAT tells us only this:

In denying asylum, Peters ruled that the men hadn't shown they had been
persecuted in the past or likely to face future persecution.

So we are left to wonder. Is the judge saying that these hapless pro se appellants failed to state the salient facts of their case? That she was not informed of a situation that smells and quacks like any Webster-preferred definition of persecution? Or does her ruling mean something very different?

I am neither a lawyer nor a judge, but it seems clear enough that the operative authority by which the matter should have been adjudicated is contained in a UN Convention, endorsed by the United States by dint of a more expansive protocol. In relevant part, this Convention defines a legitimate political refugee or asylum seeker as:

Assuming a term of art is subject to ambiguous construction, a careful jurist might seek guidance in secondary sources, in related codifications and principles, or in dictionaries. To "persecute" according to Webster, is "to harass or punish in a manner designed to injure, grieve, or afflict
; specifically : to cause to suffer because of belief." Interesting.

And then there is Article 19 of the original UN Declaration of Human Rights, to which the United States is also a signatory. Goes like this:

Everyone has the right to freedom of opinion and expression; this right includes freedom to hold opinions without interference and to seek, receive and impart information and ideas through any media and regardless of frontiers.

And  if such guiding proclamations still seem a smidge too vague and slippery, a U.S. judge might yet seek counsel in the emanations and penumbras of a native document. I know one that might even be "on point." Silly goose that I am, I have it memorized:

Congress shall make no law respecting an establishment of religion, or
prohibiting the free exercise thereof; or abridging the freedom of
speech, or of the press; or the right of the people peaceably to
assemble, and to petition the Government for a redress of grievances.

Perhaps there's yet an argument, supported by the weight of reams of caselaw. Perhaps the fact that these guys were facing serious time for writing words, is in no way clear evidence of persecution. I am aware that countless people have it worse. I can be blind to nuance, slow on the uptake. Could've been a lawyer, but I wound up here.

But there is another possibility, almost too simplistic to consider. It it at least possible with some effort to imagine that a gavel-wielding magistrate, secure in the knowledge that no one was looking, simply didn't like the words used by two men over whose fate she was authorized. It is possible, in other words, that she was being a cunt.

Whatever the case, seeing as Simon Sheppard stands to be locked away for another half-decade, I'll give him the  the last word:

We're not cowed and we're not repentant . . . We have the
right even to make mistakes. We could be wrong, it's not inconceivable.
We have a right to be wrong. All we're doing is speaking our minds.

3 thoughts on “Persecution is Complicated: An Update on the “Heretical Two””