Since its inception, more or less, The Hoover Hog has included among its marginal "heterodoxy and crimethink" links an obscure Dada-doused outpost of bizarrely assembled provocations called Heretical.com. It's a peculiar spot, where naked expressions of racism, misogyny and anti-Semitism commingle with genuinely interesting documents in an easter-egg-colored collage of irredeemably irresponsible performance satire. Upon entering, you encounter a kind of odd-knit directory of links where R. Crumb's id-channeling panels cheek up next to National Vanguard polemics, Wotanist pro-polygamy screeds, Spiegeleman-disapproved Holocaust comics, Cargo Cult exotica, anthropological pornography, 70s-era sexual decryptions, inconvenient Darwinism, inconvenient Lovecraftianism, coke-addled Freudiana, anti-television animadversions , suppressed sexology, and good old-fashioned anti-miscegenationist cut-ups. Stick around long enough and you discover the archive of columns by the site's co-curator, "Luke O'Farrell," a self-styled wise-guy who wallows in the worst of it and seems to have a sore spot for da Jews. As hate sites go, Heretical is sui generis. Good for a laugh, an indignant grunt, a befuddled wince, or another guilty click or two or ten. Depending on your mood. You get the idea soon enough and you forget all about it. Until you are reminded.

It turns out the site is administrated by a couple of British meshuganas named Simon Sheppard and Steve Whittle, alias Luke O'Farrell. They look like characters. Go ahead and hate on them, if that's your thing: 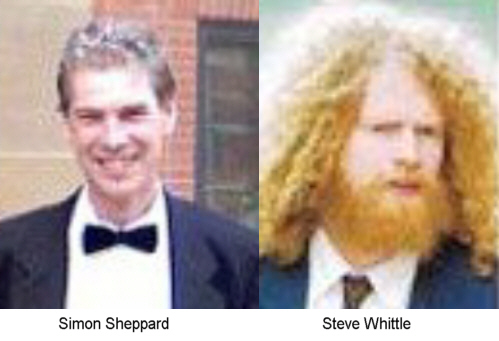 I'm sure you'll feel better knowing these mean-spirited weirdos are in jail. And in the United States, no less. California to be specific. By all accounts, they came to our freedom-loving shores seeking political asylum after a British court found them guilty of  "stirring up racial and
religious hatred" (or something like that) for writing and publishing the wrong words about the wrong subjects in the wrong way and there you have it. They've been behind bars six months and counting, locked away in a Santa Ana cell, by order of the Department of Homeland Security, where their appeal for asylum is pending before an INS judge with hearings scheduled for select dates throughout March.

If you're looking for a credible source to verify the grisly details, good luck finding one. I've scoured and scraped and have yet to locate a single
fucking mention of this case in a reputable American news source. If
the ACLU gives a shit, they're keeping it on the DL. You can read a series of snidely pitched articles in the Yorkshire Post, or you can sift through the editorial fumes provided by any number of dodgy dissident sources, such as Lady Renouf chatting it up with David Duke, or Mark Green writing for Rense.com. Or you can rely with the dense reportage leading the Heretical site. Go with your gut. Take it with a grain.  The plain reality appears to be that two nonviolent men are incarcerated in the land of the free for the content of their thoughts. And somehow it isn't newsworthy. I find this remarkable.

On March 12, the "Heretical Two" stood pro se in their first of several hearings before U.S Immigration Judge Rose Peters. The account posted on the Heretical site is the only one I can find:

Simon Sheppard and Steve Whittle (who were brought into
court in handcuffs and leg irons, which, they confirmed, is standard
procedure when asylum seekers are held in detention pending the hearing
of their case, and not victimisation of themselves) presented their own
cases, as their attorney, Bruce Leichty, had withdrawn from the case by
leave of the Court, since he was not satisfied with the (substantial)
retainer that he had received from friends of Simon and Steve. The U.
S. government was represented by its attorney, Miss Myers. The Court
heard evidence from Simon and Steve about their experiences at the
hands of the British police and Crown Prosecution Service, and also
from their English counsel, Adrian Davies, who gave evidence about the
relevant provisions of English law (the Public Order Act 1986, as
amended) and the English Court’s assertion of jurisdiction over web
pages hosted on a server located in Torrance, California. The hearing
was conducted in a very fair, courteous and thorough manner, though
inevitably Simon and Steve were at some disadvantage, because they are
not lawyers, and are moreover being held in prison, where they have had
very limited facilities to prepare for the hearing. After a lengthy
sitting, the Court adjourned to 1 p.m., West Coast time, on 24th March,
when Simon and Steve will address the Court on their own behalf, and
Miss Myers will make representations on behalf of the U. S. government.

My bias is for individual freedom. Has been since I was a pup. I try not to get all sentimental about it, but free speech is one of those core issues that still raises my rankles. I think it's despicable that Max Hardcore is serving time for obscenity and I wish Ira Isaacs all the best. It should absolutely fucking concern civil (and uncivil) libertarians that the U.S. government is complicit in the persecution of these eccentric limey hatemongers. The edges aren't even blurry. No animals were harmed and no teenage innocents were brought to tears. Whittle and Sheppard are charged with publishing offensive words and images and no one should go to jail for that.

Lenny Bruce is dead and those Skokie Nazis are fading into textbook lore. Freedom
of expression isn't a fashion signal. You can't wait around for the
next typecast martyr. The feds aren't worried about Larry Flynt or Bill
Maher, and your precious blog is probably safe for now. But these guys are in
serious trouble for no good reason, and the silence is palpable. This is the genuine article and you aren't even paying attention.

If you can set aside your cynicism just long enough, why not write a letter to the ACLU? Just bring the matter to their attention. Contact information for their Southern California division is posted here. You might also consider sending a note to the Orange Couny Register, or the L.A. Times, since they would presumably have an interest in covering a major free speech case that's playing out on the home turf. Perhaps they discarded those other press releases for reasons of provenance, suspecting it was all an elaborate rightwing prank. Perhaps that's all it ever was. There must be some explanation. This is America, after all.

3/31/09 UPDATE: My thanks to several readers who referred me to this OC Weekly article, which, to my knowledge, is the first American semi-msm mention of the case to date. Snarky but fair:

Amongst the many wabs, a couple of chinitos, and I'm sure more than a couple of gabachos
currently in custody at the Santa Ana Jail are British nationals Simon
Sheppard and Stephen Whittle. They haven't committed any crime in the
United States but have nevertheless languished under the watchful eye
of SanTana immigration guards for almost two years in a fascinating
case involving free speech, international jurisdiction, Holocaust
denial, and an American media that just doesn't give a damn about those
topics.

Sheppard runs The Heretical Press,
an online repository of far-right essays, photos, and just plain
bizarre entries (don't they realize R. Crumb is being satirical when he
publishes a comic titled "When the Niggers Take Over America"?), to which Whittle contributes. According to British reports, authorities raided Sheppard's flat in 2004 after a copy of his Tales of the Holohoax
were found inside a synagogue. After discovering the contents of The
Heretical, they arrested Sheppard and Whittle for distributing hate
speech online.

If that's not Orwellian enough for you, refry
this: Sheppard and Whittle claimed that British courts had no
jurisdiction over The Heretical and its materials since its servers hum
along in Torrance. But the Brits don't care.

Prosecutors didn't agree with their excuse, and convicted the two
in January for publishing racist material online–the first conviction
of its kind in the history of the United Kingdom. "People in this
country are entitled to be racist and they
are entitled
to hold unpleasant points of view, but what they are not entitled to do
is publish or distribute written material which is insulting,
threatening or abusive and is intended to stir up racial hatred or is
likely to do so," a prosecutor told the Yorkshire Post. "If this sort of material is made generally
available on the internet or by pushing it through people's doors
indiscriminately, it is likely that racial hatred will be stirred up in
some people who are exposed to it – the young, the impressionable, the
gullible, and so on."

British courts had to convict Sheppard and Whittle in absentia,
however. In
July 2007, the two skipped bail and made their way to LAX, where they
promptly turned themselves over to authorities and asked for political
asylum, claiming the British government was harrassing them for their
"satire." Immigration officials hauled them to the Santa Ana Jail,
which has a contract to help out the government with immigrant
detainees. Read their case for asylum here.

"This is a test case for the US on whether the American court will
protect anti-semites and those that incite the hate that leads to
anti-Jewish or anti-Muslim violence, or whether it respects a British
court decision and sends these people back for sentence," a Parliament member told the Post.

The fates of the Heretical Two is in the hands of Immigration Judge Rose Collantes Peters, who has a past of thumbing her nose at British courts. In 2004, she went against the wishes of the American government and ruled that la migra
couldn't deport Sean O'Cealleagh, a bartender at O'Malley's in Seal
Beach, for having been convicted in England for his role in the murder
of two British soldiers during a 1988 Irish Republican Army funeral. This past Tuesday,
Peters heard final arguments in the case of the Heretical Two, with
Sheppard and Whittle acting as their own attorneys because the attorney
originally recommended to them by Mark Weber of the Holocaust-denying
Newport Beach-based Institute for Historical Review  dropped out after
not getting paid enough cash (according to The Heretical Press home
page). Peters is expected to deliver her verdict within 30 days.

The
saga of Sheppard and Whittle has drawn nary a press report in the
United States, even though it involves all sorts of free-speech
questions. But the Heretical Two have become far-right causé célebres,
earning support from the aforementioned IHR, David Duke, and other
types of trash.

Then again, supporters of the Heretical Two make this interesting point:

The
question is not whether you like Sheppard and Whittle, or agree with
their writings, or the other material posted on the Heretical
site.  It is, quite simply, whether you are prepared to help
ensure the effective representation of two men seeking to set a vital
precedent for genuine asylum seekers from oppressive, liberticidal
regimes, seeking refuge in the world's last true free speech zone.

The byline goes to Gustavo Arellano, who may or may not be a Hog habitué.

Meanwhile, the Yorkshire Post provides an update on the asylum proceedings, with additional coverage and linkage heading the Heretical site. Looks as though things may drag on for a while.

14 thoughts on “Sympathy for the “Heretical Two””