Insanity dislocates the nervous system from its axis. Mind and body lose the symmetry which both require. Hence, in the most extreme states, a multiplicity of persona, compete with one another, for mastery of the mind. The discursive intellectual sees deeper still. He sees a society where mounds of corpses left redundant in the Nazi’s wake were thought by many to have deserved their fate. Who then, in circumstances such as these, is wholly sane? The truth is that we are all in some sense mad. We are liable, in that moment of madness, to go over to the other side. We are sick because we have never diagnosed the possibility of curing our sickness. We are immoral because we lack the propensity to behave morally. In that moment of madness we are too nervous to attempt anything with anyone unless they’re a corpse first. Necrophilia is the privilege of the naturally human. The lividly swinish, the essentially bestial, the thing from which we emerged, and he stands there, behind every lawyer, every judge, every mendacious cesspit of a politician. You will find him there. The man with the gun, the individual of the first cause, the articulator of the original violation: Cain; the man who killed Abel. 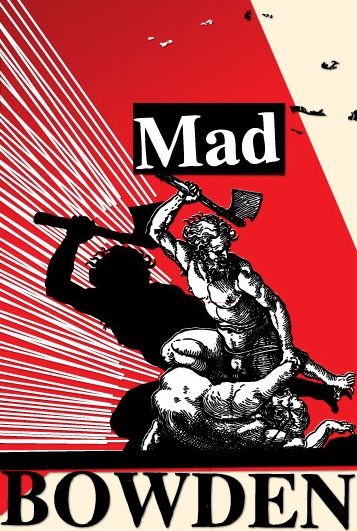 Jonathan Bowden's Mad will be released by Nine-Banded Books in May, 2009.