For
the first time in a long while…an anarchist libertarian has
sounded out. …With his love of nature and disgust of bombs and
feds, Smith could become a kind of playwright laureate of an American
Greens Party. But, then, he’d probably rather go it alone.

* Refers to the original play, from which the novel is adapted. 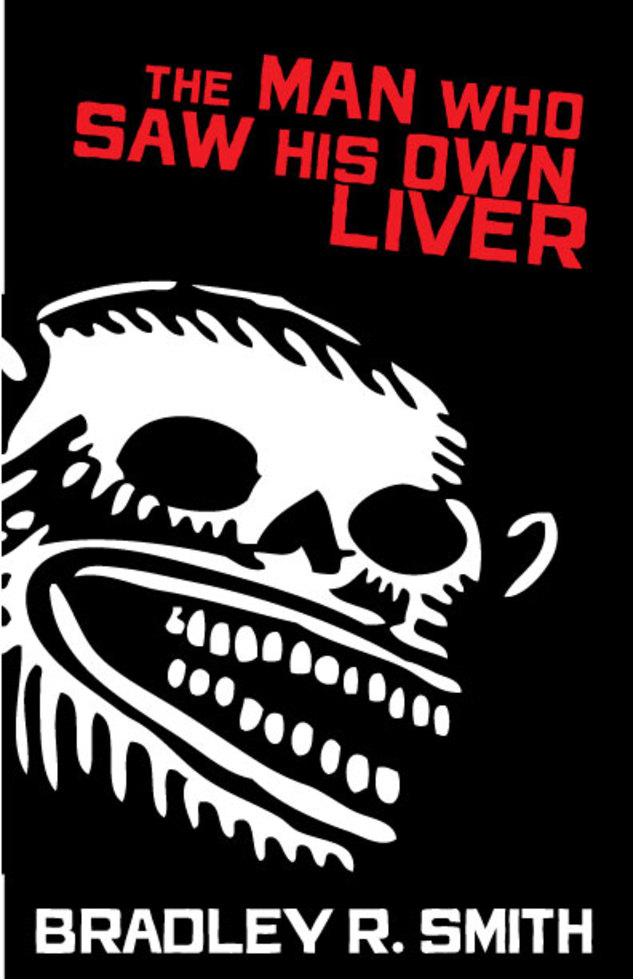 Meet A.K. Swift, a working-class war
veteran and family man who is haunted by visions of nuclear apocalypse.
When matters of conscience determine that he can no longer support the
State-sponsored institutions that create the machines that threaten the
living, A.K.decides to stop paying. Trouble is, he’s not a very good
tax resister. He forgets to attend the meetings and doesn’t bother to
fill out the proper forms. Now he worries there may be consequences.

From the dustbin of Cold War protest  literature, Bradley Smith’s The Man Who Saw His Own Liver
emerges as a heartfelt meditation on the timeless problem of the
individual against authority. Rooted in libertarian theory and the
moribund tradition of American transcendentalism, it is the story of an
accidental rebel trembling in comic defiance under the yoke of God and
State, and before the faceless Leviathan of modern Bureaucracy.

Smith’s  writing is animated by a crisp and laconic prose-poetic hum. His is  a
uniquely personal canvass in which storytelling and gently wrought
polemics interweave, seamlessly, with turns of magical realism coming
to rest in that  frail, strangely familiar liminal space, where ineffable exaltation and terror transcend the  political.

Originally conceived and performed for the stage in 1983, The Man Who Saw His Own Liver
is presented by Nine-Banded books in novelized form. It is appended
with Smith’s short story, “Joseph Conrad and the Monster from the
Deep.”

Qualified Praise for The Man Who Saw His Own Liver

…a
graceful (if a bit didactic in parts), strange, dream-worldish
meditation on the Sword of Damocles anxiety of the nuclear-armed cold
war and on personal responsibility.

Smith’s
slim volume, a novelization of his own play The Man Who Stopped Paying,
has the feel of Ludwig von Mises passed through the filter of, say,
Errol Morris (or, in his artier stages, Roman Polanski); if you’re
seeing this in your head while you read, this is a book whose internal
pictures invite long, slow camera pans over the garage where the entire
narrative is set. There’s a guy, and he’s talking. Reminiscing, mostly,
though as I mentioned above he does stop every once in a while and go
off on a “and then I realized…” binge. They’re small, though, and
Smith’s narrator does spend most of the novel’s length simply relating
events from his past. This is often a tough sell where a book is
concerned; after all, it’s just a guy talking. But it can be done, and
done well…

The writing style is at the same time sparse, and elegant. This is no
dry accounting, but a work of poetic prose, rich in metaphor and
emotional content. Each reminiscence stood alone for me; which might be
a drawback to the reader expecting a more linearly styled memoir.
Doubly so for those who don’t like their diatribes leavened with
subtlety, or self examination. Being the sort of fellow who likes to
bury his head in the cat box at the mere mention of politics, extremist
or otherwise, I was fairly taken aback upon delving into the author’s
‘infamous’ political predilections (addressed by Chip Smith in the
introduction). It made me glad that I read the book first; I still
haven’t ever read ‘On The Road’, and probably never will, because I
made the mistake of reading the bios first, and can’t get past the fact
of Kerouac being a total ass-wipe. Now, instead of picturing Bradley
Smith as some cartoonish Art Bell reject with a penchant for paranoid
conspiracy theories, I’ll always see him as a zen aspirant on his way
to cracking that last koan. And how can you be mad at a guy who writes
a line like this?…

I’ve always felt the urge to slip through desire, like an eel passing through nets cast out for bigger fish.

If
you like great prose, written by a man just an epiphany or two short of
emergence into a new, brilliant sphere, buy this book. There’s an
innocent clarity here, as well as a surprising sense of humanitarian
compassion.