L.A. Rollins is an aphorist, or rather, an againstist. He is of the
fraternity of those who deny both sides of every question, the
refusniks who are always untimely. . . . For him, there isn’t a
department of human experience that won’t sell you a bill of goods.

– Bob Black, Beneath the Underground 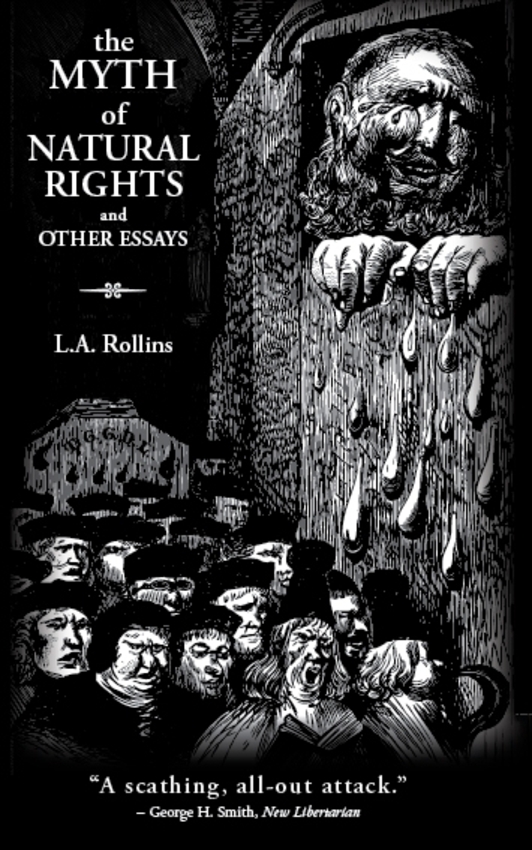 No, it won’t stop bullets. It won’t keep people from ripping off
your property. It won’t even stop the government from putting you in a
concentration camp, or executing you. About the only thing a “natural
right” will stop is enlightened thinking on the ethics of liberty. Once
you’ve read The Myth of Natural Rights and Other Essays, you’ll be able to put those imaginary protectors of freedom back in the museums where they belong.

Libertarian
scholars have had a difficult time being taken seriously in
intellectual circles. There’s a good reason for this. While they have
gained recognition and acclaim for their staunch defense of the free
market, compelling advocacy of civil liberties and devastating
condemnation of interventionism, their stubborn reliance on the ancient
myth of natural rights leaves them in philosophical disrepute. The
doctrine of natural rights has persisted among libertarians, because
there has never been a systematic and thorough critique of all it
implies. Until now.

In one compact work, L.A. Rollins
shatters the myth of natural rights, while exposing the “bleeding-heart
libertarians” that promote it. With careful research and ample
documentation, he shows that thinkers like Ayn Rand, Murray Rothbard,
Tibor Machan and Samuel Konkin not only violate reason and logic in
their defense of natural rights, but also violate the standards they
set for themselves.

Back in print for the first time in
years, this newly revised edition features an insightful introduction
by the Stirnerite-libertarian upstart,TGGP, along with a new afterword
by the author. Bonus material includes an updated selection of
splenetic jeu de mots from the underground classic, Lucifer’s Lexicon, as well as Rollins’ never-before-published writings on poetic insurrection, the Holy Qur’an and Holocaust revisionism.

Praise for The Myth of Natural Rights (Loompanics edition, 1983)

Rollins has made hash of the logical connections in Rothbard’s argument.

An important book, which every reader interested in libertarian theory should acquire.

– Jeff Riggenbach, author of In Praise of Decadence

Rollins does a fabulous job of making fools out of  many a libertarian’s
philosophical heroes.

An argument could be made that a book like this is potentially pretty damn
dangerous.

You can place an advance order through Amazon here. I’ll be taking PayPal orders as soon as the Nine-Banded Books site redesign is ready for prime time, which shouldn’t take much longer. To reserve an autographed copy, contact me.